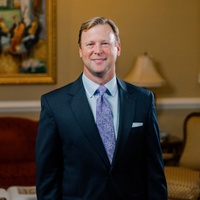 Eric S.Wilson is Managing Director of the boutique investment firm Foundational Wealth Advisory, which is a Member of Advisory Services Network. For the past 28 years, Eric has served the varied needs of individuals and families whose wealth has the potential to change the essential nature of their descendants’ lives.

Eric began his investment career as a college intern at Merrill Lynch in 1993, which led to his being hired full-time as an Associate Financial Consultant in 1994. Though his titles changed in the years that followed, his passion for the betterment of the firm and how it served its clients did not. This passion would lead him to serve on a national council for Merrill Lynch, representing the Southeast as an inaugural member of the Managed Solutions Advisory Board. Through his service on this select 12-member board, Eric helped contribute to enhancements to the institutional money management programs used by Merrill Lynch's 14,000+ advisors.

In February 2010, Eric joined the newly formed company of Morgan Stanley Smith Barney, which today is called Morgan Stanley Wealth Management. Seven years later, in May 2017, tired of the client constantly being displaced by the shareholder and the human resources department, Eric left "Wall Street" to build a firm focused solely on the client. He named the firm "Foundational Wealth Advisory".

Eric is certified as a Certified Investment Management Consultant (CIMC®) through the Investment Management Consultants Association and as both an Accredited Investment Fiduciary (AIF®) and an Accredited Investment Fiduciary Analyst (AIFA®), which are both earned through Fiduciary360. Eric also is a Certified Estate and Trust Specialist (CES™), which is a designation granted by the Institute of Business and Finance.  While at Morgan Stanley, Eric was also among the select few wealth advisors recognized and designated by Morgan Stanley as a Family Wealth Director, a designation reserved for advisors who have demonstrated high standards of delivering a depth and breadth of experience and knowledge in wealth planning and investment advice.

A native of Waycross, GA, Eric graduated with a B.B.A. in finance, economics and accounting from Mercer University. He has served on the advisory boards of the Community Foundation of Central Georgia and the Children’s Hospital of Central Georgia and as a member of the Macon Estate Planning Council. He has also served as the Chairman of the Board of Visitors of the Stetson School of Business and Economics at Mercer University and as a member of Mercer's Athletic Foundation Board.  Recently, Eric became an adjunct professor at Mercer University where he teaches an MBA level course on investments.

Eric and his wife, Cindy, are proud parents of four sons, ages 21, 21, 21 and 14. They belong to Ingleside Baptist Church where they serve in various ministries of the church.